I saw the African-American Civil War Memorial when I visited DC in 2010, and little did I know that about a year after my last visit, an entire museum opened to educate the public on the role of African-Americans in the Civil War.  Despite the fact that the exhibit, much to my husband’s chagrin, is mostly devoid of technological enhancements, we learned so much about slavery and about the civil war. 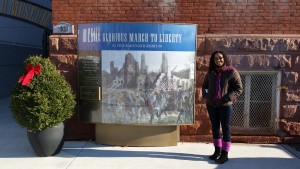 This exhibit recounts details about the history of the slave experience in the U.S. including slaves’ experiences in the Civil War. What stood out most to me about the exhibit is what I learned about President Lincoln’s reason for writing the Emancipation Proclamation.  He did not go into the war intending to free the slaves.  It was only after the union army took many hits from the confederate side that Lincoln chose this lifeline.  Emancipating the slaves was, in fact, an almost last resort effort to win the War. After some strategic planning to prevent the public from realizing he needed former slaves to enlist and fight for the Union, he signed the Emancipation Proclamation on January 1, 1863.  As a result, thousands of African-Americans sought refuge in Union encampments where they were first held as “contraband” and were eventually allowed to enlist.  By the end of the war, approximately 200,000 African-Americans had fought and contributed to the Union’s victory. The irony is that despite what we are taught, Lincoln’s desire to emancipate the slaves did not cause the war; instead, his desire to win the war caused Lincoln to free the slaves. And it worked.  On the front of the museum’s brochure is this 1865 quotation from President Lincoln: “Without the military help of the black freedmen, the war against the south could not have been won.”

The exhibit’s extensive panels highlight the strategic value of having African-American soldiers, who were more familiar with the southern culture and terrain, fighting for the union and includes the dramatic story of Robert Smalls’ daring delivery of a confederate warship into the hands of the Union navy.  The exhibit also captures the roles of Black women in the war including celebrities like Harriet Tubman and Harriet Jacobs and other prominent figures like Frederick Douglass whose two sons enlisted. 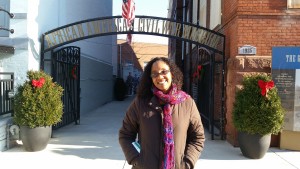 I have shared some of these insights with a my intelligent, educated friends since my visit, and none of them knew the role emancipating the slaves played in the Union’s winning of the Civil War.  It seems like a simple enough fact from U.S. history, and it’s difficult to imagine that the widespread ignorance is coincidental.  This example offers one more reminder that we must be vigilant about using reliable sources to educate ourselves and our communities.  Visit this museum, and then share with your friends this critical and not-typically- taught explanation for why the Union army actually won the Civil War.

Check back next Monday, March 30, for a look at The Alexandria Black History Museum.