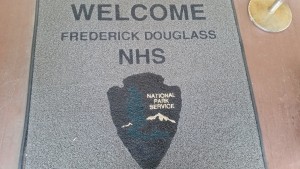 Who knew that nineteenth century African-American icon Frederick Douglass spend the last seventeen years of his life in Washington DC?  His house is now owned by the National Park Service and open to the public. Park rangers lead tours of the twenty-one room mansion where many of Douglass’s belongings including artwork, furniture, books, clothing, and even a set of dumbbells are still housed and preserved thanks to the advocacy of Douglass’s second wife, Helen Pitts Douglass, to maintain the site as a historical monument after his death. Douglass even had a “growlery,” 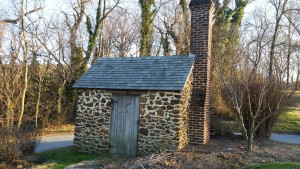 a small outdoor structure which our tour guide referred to as “the first man cave,” where Douglass spent time engaging in one of his favorite and most renowned pastimes: reading. Our guide recited to us a number of anecdotes about Douglass’s later life, traveling around the world and playing with his grandchildren at home.

In addition to the house, the site includes a visitors’ center with a small theater where we watched a short 1980’s film chronicling Douglass’s life.  A wall in the Center is adorned with a timeline of Douglass’s life that includes some artifacts like a cane that was given to Douglass by President Lincoln and Douglass’s death mask.  Another wall is covered with quotations from Douglass’s many writings and speeches. On our way out, we encountered another park ranger, friendlier than the one who’d given us the tour, and my husband quizzed him on Douglass’s financial circumstances.  We learned that Douglass had invested $10,000 into and had been president of the Freedman’s Bank just before it closed in 1874. 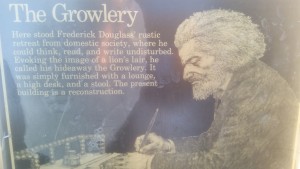 We left truly awed by this man, born a slave but amassing enough wealth and influence to go on speaking tours, write bestselling books, purchase a mansion, invest in a bank, and travel the world.

Check back next Monday, March 23, for a look at The African American Civil War Museum.