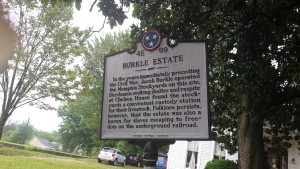 The Slave Haven Underground Railroad Museum was the second major stop on our Memphis Heritage Tour.  On the site is the home built by Jacob Burkle in 1849.  Although no concrete evidence exists to prove this, the home is marketed as a stop on the Underground Railroad for self-emancipated slaves heading toward the Mississippi river.  Some call the story “folklore,” passed down through the community’s chain of oral history.

Our tour guide, Elaine Turner of Heritage Tours Memphis, ushered us through the front door into the foyer of the home.  We huddled there looking around at artifacts sitting on shelves and hanging on walls.  Ms. Turner drew our attention to a map depicting routes along the Underground Railroad in the middle hallway. She pointed out that according to the map, a large number of self-emancipated slaves would have traveled through Memphis.  What stood out most to me about this visit was the discussion that ensued about the alleged connections between the triangular trade and changes in shark migration patterns and even DNA and weather patterns. That discussion got me thinking more and more about the ongoing and current role of “folklore” in African-American communities. 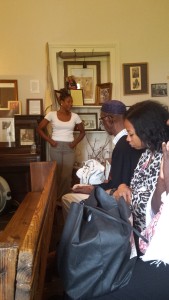 Eventually, a young woman invited us into a room furnished with primitive church pews.  Ms. Turner gave us a quick lesson on the hidden messages in Negro spirituals, and the young woman sang beautifully for us, “Wade in the Water” and “Swing Low Sweet Chariot.”  Ms. Turner pointed out to us the quilts hanging around the room and explained the significance of quilts in many communities of slaves.

Ms. Turner ushered us through the house until we finally made it to the cellar.  She lifted the trap door and led us down the wooden staircase.  There, she showed us what she considers evidence of the house’s place in Memphis’s Underground Railroad history.  The cellar contains a short staircase that leads up to a wall.  Ms. Turner argues that the only explanation is that in the past, the cellar housed people who needed to get around surreptitiously, and the staircase must have let to a secret entrance or exit to the house traveled by escaped slaves.  Her theory is that Burkle gave refuge to people who had escaped slavery in that cellar and that they had some way of traveling in and out undetected.  She even switched off her flashlight momentarily to give all of us a brief notion of what that space might have been like in the nineteenth century. 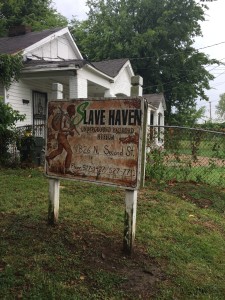 No matter how historically accurate the story is of the Burkle home as an underground railroad stop, the Slave Haven museum provides a haunting physical reminder of the horrors of slavery and the will of so many to escape.

Check back next week to read about my visit to the Alex Haley House Museum and Interpretive Center.