My friend Melody and I had plans to visit Allensworth for at least a year.  I had heard about the historic all-Black town throughout my childhood when my father volunteered for the state parks system; I remember him talking about this significant town for California African-American history, but I don’t remember ever visiting with my family.  Melody and I finally made it for the annual Old Time Jubilee in May.

The town of Allensworth was founded in 1908 by Colonel Allan Allensworth along with a few other African-American founders.  In 1906, after being sold down river as a child for learning to read, escaping slavery, joining the Union navy, working as a pastor in Nashville and Cincinnati, and working as a chaplain in the 24th infantry of the US Army, Colonel Allensworth retired and migrated, along with millions of other African Americans, to California in one more effort toward self actualization. 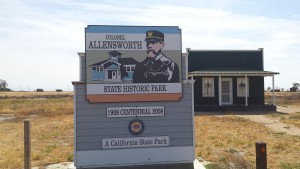 Allensworth believed that African-Americans were better off living independently in their own communities.  He waged a campaign and traveled around recruiting people to move to Allensworth appealing to their desire for a home where they could feel comfortable and thrive.  At that time the town was also along the Santa Fe railway system, with easy access to Los Angeles and San Francisco.

Unfortunately, the town did not last. In 1914 the rail line moved. The area suffered a catastrophic drought. Colonel Allensworth died in an accident in 1914. And in 1915 the town lost its bid to build a Black Polytechnic institute (like Tuskegee Institute) because segregation in schools was illegal in California.  Thus, the population started its slow decline soon after those letdowns, and the Depression dealt the final blow to the Colonel’s vision. 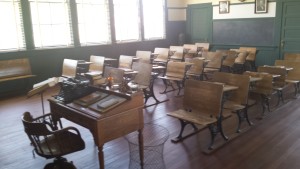 We arrived for only about the last two hours of the Jubilee, so we missed most of the scheduled activities like the tug of war, the foxtrot lessons, and the cakewalk held in various locations around the park.  We went into the temporary Visitors Center first, signed in and noticed the map showing where previous visitors had come from. Next, we entered the schoolhouse, which, it turned out, was the second one built in the town and was initially led by William Payne.  In it were set up period desks, an old typewriter, and other furniture.  A docent in that building offered information about its history.

Next, we hit in the only food vendor line for fried fish, where we met Joseph and his daughter, Kia, volunteer docents for Allensworth events.  They answered some of our questions about the demise of the town, and I shared my Our Museums project with them.  We ate in the picnic area and listened to a few youth acts singing gospel music. 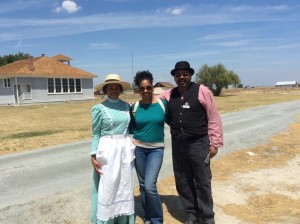 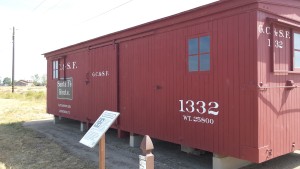 We moved on to walk around the town visiting the buildings like the library; the Scott-Gross drug store, where we met Shirley Collins and Fannie Franklin making button spinner toys for kids; and the Singleton General Store where we saw the original ice box and bulk items display case.  We also passed a barber shop; the Smith house, which is rumored to be haunted; the hotel; a couple of other stores; a boarding house; a railroad car; and a bakery. 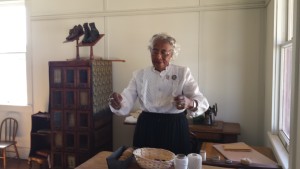 Then, we headed b 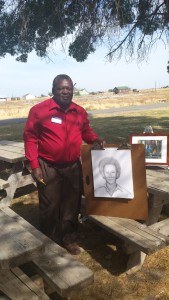 ack to the area around the visitors center where most of the activities were being held, and we asked some more questions and were eventually directed to the standout encounter of the day.  We met Samuel Pierro, an artist who was born in Allensworth and comes back to sell his artwork at the events.  He shared with us his incredible family’s story and gave us great insight from an intimate point of view.  Apparently, his parents raised him and his fifteen brothers and sisters in Allensworth.  He attended the one-room schoolhouse for elementary and junior high school.  Then, his sister ended up the last principal of the school before it closed in 1972 when the Park Service took over the area.  Another of his sisters graduated from Harvard, and he told us with great pride that all sixteen of his parents’ children graduated from high school, and a number of them also graduated from college.  He shared a lot of fascinating family stories and rumors that I assured him I would not share on my blog.  You will have to go to Allensworth for the next event and meet him for yourself to hear his story about Ed Sullivan. He also shared the history of the campaign to getting Allensworth into the State Historic Park system. I was so glad we met Samuel.  Hearing about Allensworth’s more recent history from such an intimate perspective was a real treat!

Check back next Monday, June 29th,  to read about my visit to the Tubman Museum in Georgia.