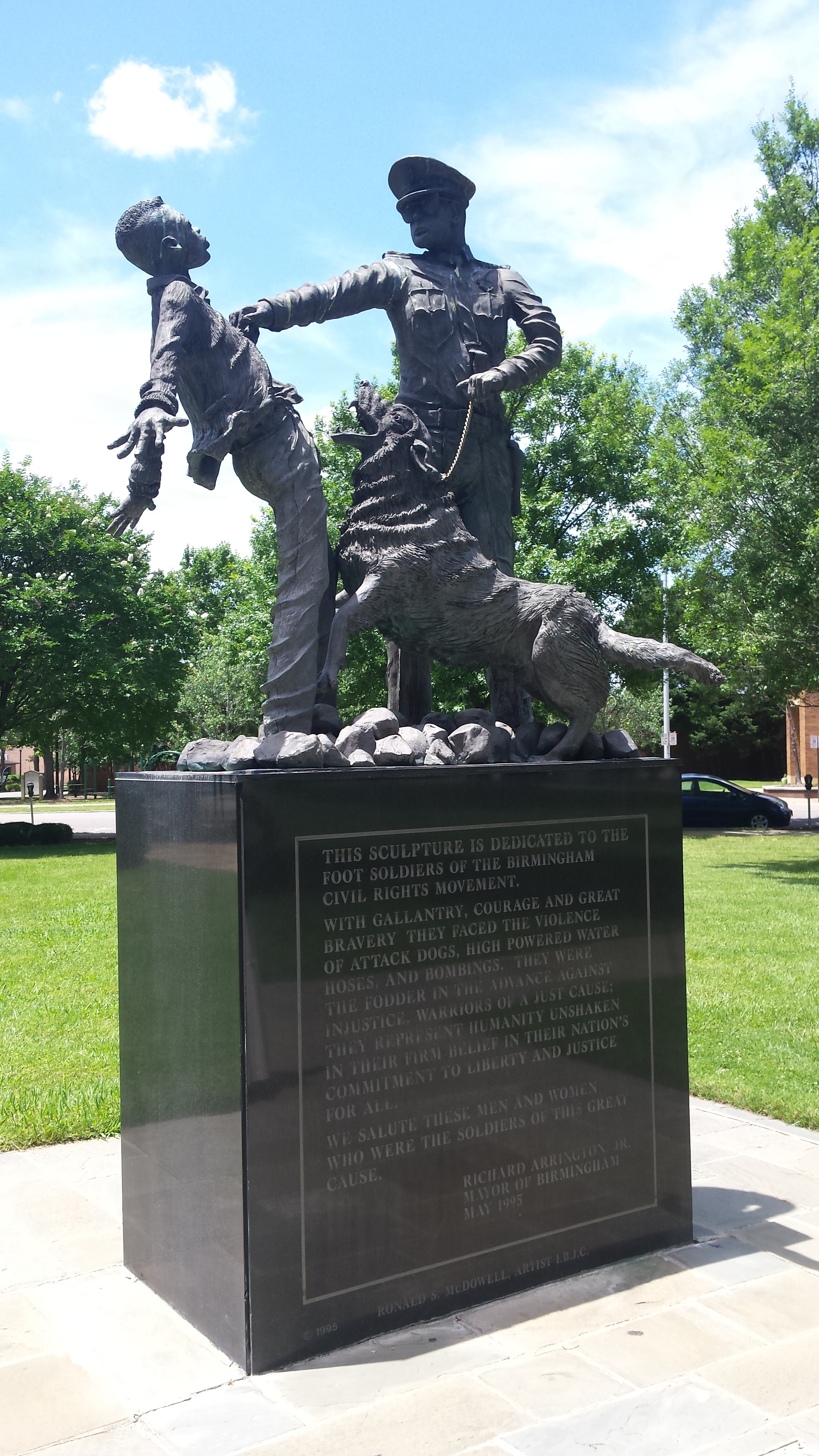 RIght across the street from them Birmingham Civil RIghts Institute and caddy-corner from the 16th Street Baptist Church is Kelly Ingram Park, formerly West Park, a significant historical landmark for Birmingham and for the nation.  It was on the streets surrounding this park in May of 1963 where Birmingham police officers unleashed water cannons and dogs on young, non-violent protestors, producing the iconic images we have all seen:

Thus, in 1991, as the Birmingham Civil Rights Institute was preparing to open, the park was renovated and designated as a memorial to “revolution and reconciliation.” 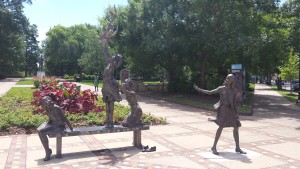 Part of that renovation included the installation of a series of sculptures throughout the park and a free audio tour you can hear by dialing 205-307-5455 as you take the “Freedom Walk” through the park.

We entered the park at the newest “Four Spirits” sculpture honoring the victims of the September 15, 1963 bombing of 16th Street Baptist Church. The park also houses monuments to historic figures like Martin Luther King Jr., pastors who supported the Civil Rights Movement, and other local heroes.  James Drake’s metal sculptures honoring the 1963 events are stunning in creatively depicting the harsh reality of violence characteristic of the time.  The Freedom Walk takes visitors through a sculpture of snarling dogs on either side of the walkway.  It also includes a sculpture of two youths standing on a platform inscribed with the words “I ain’t afraid of your jail” directly across from a sculpture of metal prison bars.   Watch this video to get a feel for some of the powerful sculptures in the park:

Two of the Birmingham Civil Rights Heritage Trails also start in the park and are identified by signs and life-size photos guiding visitors through the blocks of significant Civil Rights Movement locations and events.

The park maintains its relevance in the struggle for civil rights in America.  Just last November, people gathered there to protest the non-indictment of Officer Darren Wilson in the shooting death of Ferguson, Missouri teenager, Michael Brown. 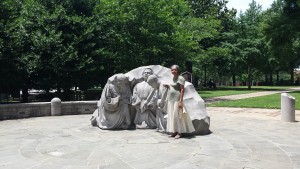 What stood out most to me about this park on the day we visited was the community of maybe twenty-five folks idling in the park.  They did not appear to be living in the park exactly, but I had the distinct impression that they spend most of their days there.  They are mostly African-American, and many of them could be seen drinking from paper bags on this Sunday before noon.  One gentleman even engaged with us in passing on his way to the group.  He shared that he was not from Birmingham originally, but Mississippi, and he has not been in touch with his family in a long while.  This group is visible in this video:

I regret not engaging more with this group to hear their experiences of the park and discover any connections to its historical significance.

Check back next Monday, July 27, to read about my visit to the exhibit, Rising Up: Hale Woodruff’s Murals at Talladega College, at the Birmingham Museum of Art.