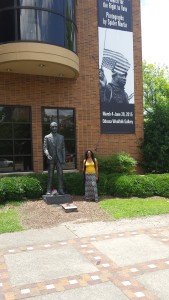 My mom and I left the Sixteenth Street Baptist Church and walked right across the street to the Birmingham Civil Rights Institute.  Out in front, a statue of tall, slim Fred Shuttlesworth watches visitors as they pass.  As we approached the box office, we smiled and nodded at a proud, purple-shirted family reunion group, a relatively common sight in Alabama in the summer. More than one Southern Black museum staffer has mentioned that in the summer family reunion groups make up a substantial share of their business.

After paying the entrance fee and ascending the Institute staircase, we were ushered into the lobby rotunda, welcomed, and instructed on how to proceed through the museum.

We first watched a film that served as a preview for the museum’s numerous elaborate exhibits. The film offers an overview of Birmingham’s history starting in 1871 as the first industrial center of the South.  The film also shows early to mid-20th century Black life in Birmingham and the lead up to Birmingham residents’ involvement in the Civil Rights Movement. 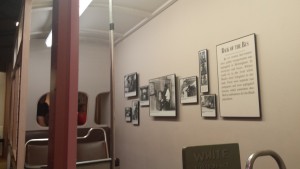 The film screening room opens into the “Barriers” gallery where visitors start their tour through Birmingham’s Civil Rights journey.  The first room includes a replica of a street car with descriptions of Birmingham’s bus segregation and a model soda fountain depicting statues of White youth enjoying themselves conspicuously as a young Black girl looks on from outside. 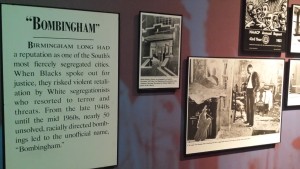 This exhibit includes rather extensive coverage of educational inequities during segregation.  It includes two model classrooms, one for White students, including all of the latest technology and texts and another for Black students, that is relatively bare with old furniture and no texts.  Another part of this exhibit depicts life in Birmingham’s Black Community including church, music, barbershops, and other businesses.  Near the end of this exhibit is a full Klan robe on display, where the city’s 1960s nickname, “Bombingham,” is posted to help visitors understand the context for the artifacts. 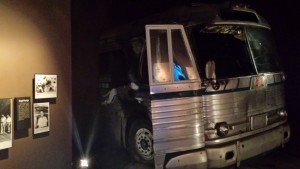 The next gallery, “The Movement” includes recognition of the Montgomery Bus Boycott and Rosa Parks along with the oft ignored women who were arrested before Parks for refusing to give up their seats and who plaintiffs in the case: Aurelia Browder, Susie McDonald, Claudette Colvin and Mary Louise Smith. To honor the Freedom Riders, a very dramatic exhibit is on display, a replica of a wreckage of the Greyhound bus firebombed in Alabama.  Wha 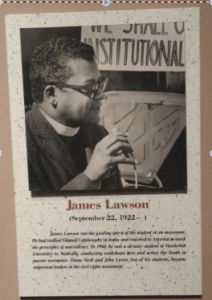 t stood out most to me in this museum was of a personal nature, two photographs and descriptions of the Reverend James Lawson’s role in the Movement are included in this gallery.  I grew up hearing James Lawson’s sermons, and he officiated my wedding, so seeing him recognized always gratifies me.

The next gallery contains one of the artifacts that is clearly a source of pride for the museum, the door to the cell in which King wrote his famous 1963 “Letter from a Birmingham Jail” in response to clergy members’ criticism of the movement. This gallery also includes projected video footage of nonviolent youth protesters being attacked with police dogs and water canons: 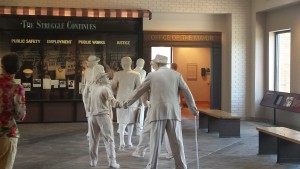 The last exhibit among the central Birmingham historical exhibits in this museum is a replica of the office of Birmingham’s first African-American mayor, Richard Arrington, who remained mayor from 1979-1999.  By this point in this ample, comprehensive museum, I was  exhausted and hungry, so unfortunately, I could not dedicate much attention to the museum’s extensive Civil Rights gallery where worldwide human rights struggles are compared with the Birmingham fight.  I hope to return someday soon to explore those last galleries on a full stomach and a good night’s sleep.

Take a virtual tour of the museum with Education and Exhibitions Director, Ahmad Ward.

Check back on Monday, July 20th to read about my visit to Kelly Ingram Park.