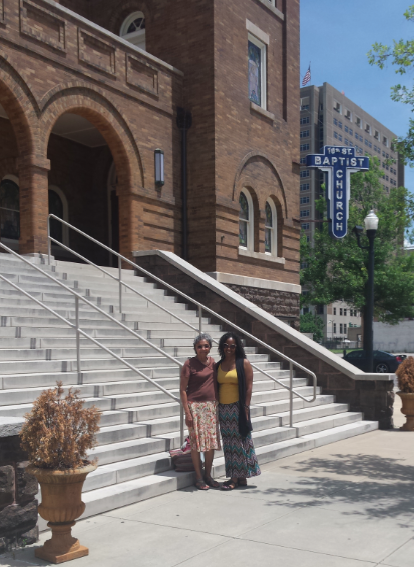 When my mom and I arrived at Sixteenth Street Baptist Church, our timing was perfect.  As we entered the church, the greeter told us that a video had just started recounting the church’s history and its involvement in the Civil Rights Movement.  We joined  about thirty other visitors in the sanctuary.  I learned from the film how tied the church had been to the Movement early on.  According to the church Visitors Guide, “Due to Sixteenth Street’s prominence in the black community, and its central location to downtown Birmingham, the church served as headquarters for the civil rights mass meetings and rallies in the early 1960s.” 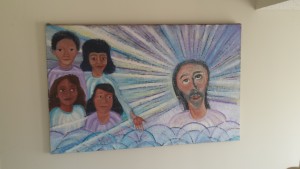 Of course, the film went on to cover the events of September 15, 1963 when a bomb went off in the church, killing four teenage girls, Addie Mae Collins, Carole Robertson, Cynthia Wesley, and Denise McNair.  Twenty other church members were injured, and the film goes on to cover the arrests and trials that went on between 1977 and 2002 of the three convicted bombers, Robert Chambliss, Frank Cherry, and Robert Blanton. 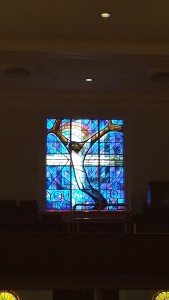 After the video, what stood out most about our visit was the talk by the knowledgeable church member and guide.  She showed us the stained glass window designed and created by a Welsh artist, John Petts, sympathetic to the tragedy suffered by the members of the church.  She told us how Angela Davis was neighbors with one of the slain girls, and her mother drove the girl’s mother over to the church after she got word that she should see about her daughter.  She also told the story of Addie Mae Collins’ sister, Sarah Collins Rudolph, one of the unknown victims of the bombing. She survived but was severely injured in the blast, was hospitalized for months, and lost her right eye. She was teased by her peers for years because of her glass eye, and she continues to suffer emotionally as a result of her injuries.  Despite the emotional strain, according to the guide, Collins Rudolph has started speaking publicly about her ordeal and about how she has overcome the adversity she faced.  I was impressed by the guide’s knowledge of the church’s well-known and more obscure history.  She encouraged us to learn the names of the bombing victims just like we know the names of male martyrs of the Movement, like Medgar Evers and Emmett Till. 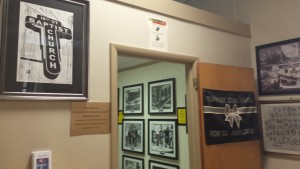 Finally, after the video and guide’s talk, the group went down the stairs to browse the church’s small Memorial Nook where photos and memorabilia from the bombing and its aftermath are on display.  As I bought a postcard in the gift shop and headed through the bustling fellowship hall toward the exit, I was reminded of something else the guide urged us to remember: the church is not simply a museum or memorial to the Civil Rights Movement; it is a living, breathing, active church whose members continue to serve its community and worship every Sunday.

Watch Lamar Washington, the church administrator, in the Memorial Nook describe the tragic day’s events and the artifacts: