I visited the Withers Museum twice during my week in Memphis, once for the opening night reception of the Association of African-American Museums (AAAM) Conference and again to show my husband the impressive collection of photographs.  Ernest Withers, a Memphis native, spent sixty years of his life taking the over one million photos that are now in his collection.  Withers’s heirs, members of the museum staff, and other professionals are in the midst of digitizing and archiving the photos.  The photos on display are separated according to historical events.  There are photos from the Negro Baseball Leagues during the 1940s and 1950s, Memphis Music History, Martin Luther King, Jr.’s 1968 Assassination, The Sanitation Worker Strike, and other photos from Memphis and the South in the 1950s and 1960s.

Withers gained popularity and credibility as a photojournalist after he published photos documenting the aftermath of the 1955 murder of 14-year-old Emmett Till in Money, Mississippi and the trial of his accused murderers.  In the gallery we flipped through a book of those photos.  Withers appeared to have had unfettered access to King during his visits to Memphis.  The gallery also has on display an extensive collection of photos of musicians who performed in Memphis like B.B. King, Tina and Ike Turner, Al Green, Aretha Franklin, Isaac Hayes, James Brown, and Elvis. 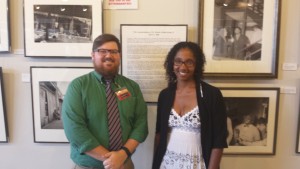 On my second visit, my husband and I met a member of the museum staff, James Moore, a graduate student studying to become a marriage and family therapist.  He explained to us how he loves working at the museum and that working there gives him the opportunity to engage with people about race in ways that he might not typically be able to access.  We talked about how many African-American museum content evokes strong emotions, and our museums should be equipped to deal with those emotions.  James said that at the Withers Gallery they offer tissues to visitors who respond tearfully to images from King’s assassination.  We discussed briefly our own experiences with managing strong emotions in museums and seeing others do the same.

We were so impressed with the Withers collection that we bought two prints and left fully satisfied with our experience there.  Later that evening, I thought of a colleague for whom I considered purchasing an additional print as a gift.  I went online looking for the image so I could call the museum the following day and order it.  However, what came up in my Google search for Ernest Withers stopped me in my tracks.  I was stunned to learn that in September 2010, the Memphis Commercial Appeal broke the story revealing that Ernest Withers had used his beautiful and iconic photographs to inform the FBI about the activities of the Movement.

I was most surprised because although it has been five years since Withers’ role as an informant was revealed, no one who I talked to at the AAAM Conference reception mentioned it.  When I started digging, I found article after article from 2010 when the story first broke to 2013 after the release of FBI records in response to a Commercial Appeal Freedom of Information Act lawsuit. In the articles, Civil Rights Movement legends like John Lewis and James Lawson are quoted expressing disappointment, mistrust, and apathy.

I hope that for future visitors, the gallery and museum administrators embrace the complexity of Withers and his role in the Movement and integrate these new discoveries into the experience visitors have in the space.  Otherwise, visitors who make the discovery on their own like I did might feel misled and betrayed, and the museum risks losing potential customers and fans on whom they depend to maintain and support Withers and his legacy.

Check back next Monday to read about my visit to the Stax Museum of American Soul Music.