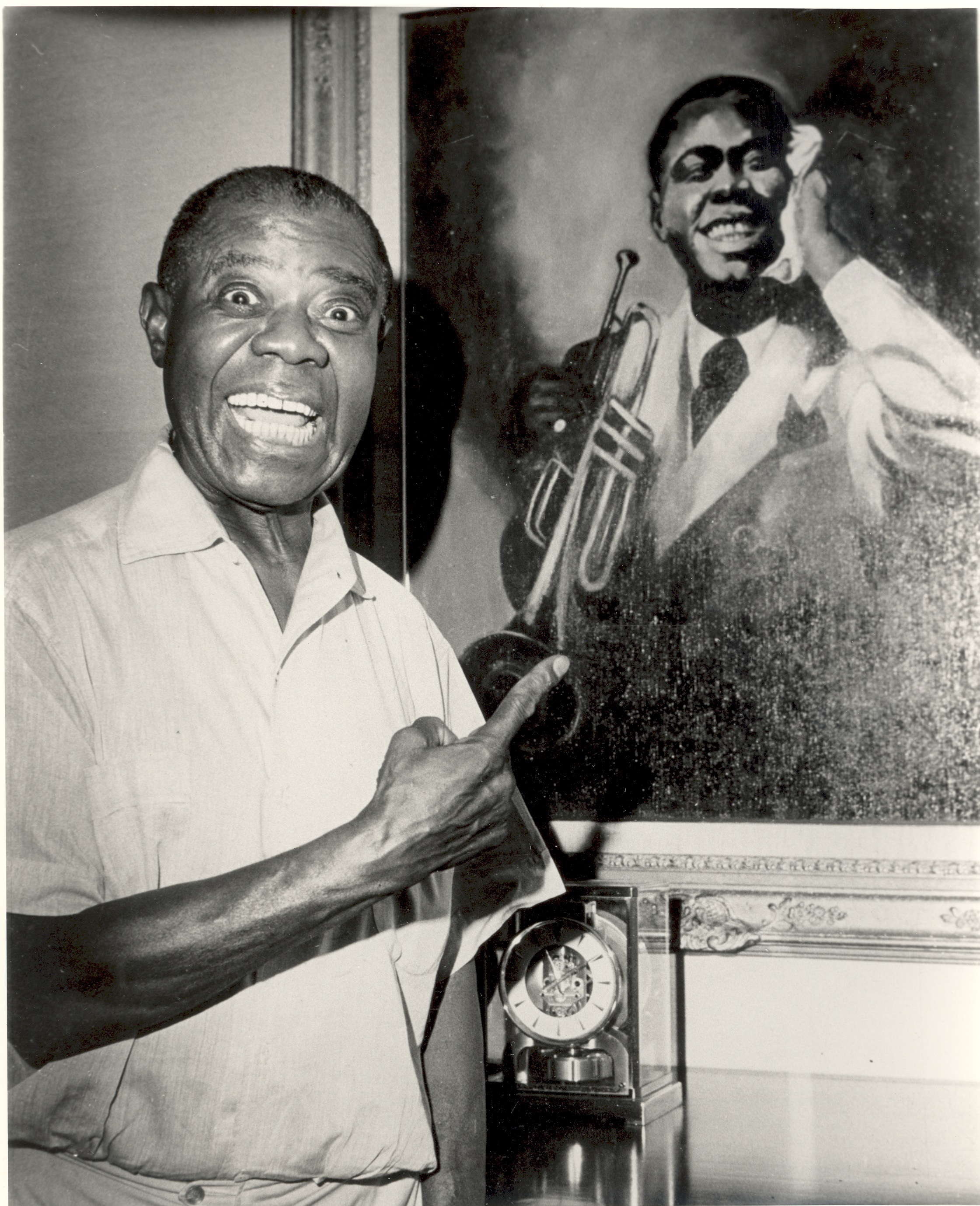 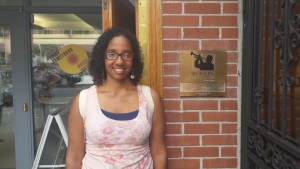 As my husband and I stood outside of the Louis Armstrong House Museum taking photos, Elaine, a volunteer docent, came out to check on us.  She welcomed us and explained that we were the first visitors of the day.  We had a few minutes before the tour would start, so she invited us to traverse the lovely garden, which serves as a performance space on the carefully landscaped adjacent lot.  After spending a few minutes in the garden, we went into the Visitors Center to start our tour.

Like many of the other museums I’ve toured, our Louis Armstrong House Museum tour begins with a video that offers some biographical information about Armstrong and background about the house. 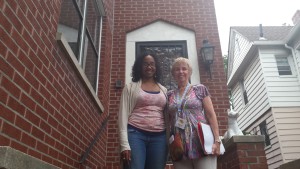 Next, Elaine led us out of the visitors’ center to the front door of the house.  At the door, Elaine insisted that we ring the doorbell just as we would have if we had visited when Armstrong was living.  In the foyer of the home, Elaine told us about Armstrong’s wife, Lucille, who bought the house while he was on the road performing.  She was his fourth wife, and they met at a cotton club where she was a dancer and married when he was forty years old.  They had no children but kept beloved schnauzer dogs.  He made clear to Lucille that she was the third most important element in his life after music, of course, and his long-time manager, mafia-connected Joe Glaser.

Unlike Armstrong who was from Louisiana, Lucille had been raised in Queens.  So she bought this modest $8,000 house close to her childhood home.  Louis was very successful by the time he married Lucille, but she chose this house in a humble neighborhood where Armstrong could traverse the streets and socialize with members of the community without the fear of harassment.  Elaine told us how he had a great relationship with the neighborhood kids and how he would help them when he could.  There is even legend that the lyrics to “What a Wonderful World” are based on his feelings about this neighborhood.  Elaine also told us that Nat Cole had attempted to purchase property in this same neighborhood and was blocked.  My husband guessed that Armstrong and his wife had no trouble because of his mob connections.

On the shelves and walls around the house, Armstrong’s collection of artwork from his travels is on display.  This includes two carvings from the Congo.  Legend has it that his visit occurred during a civil war, and the fighting stopped when he arrived and through his visit so everyone could attend his performances, but the fighting resumed once his visit had concluded.

Before we left the living room, Elaine played a recording of a conversation between Armstrong and his wife.  The new technology of the time that made recording so easy and affordable fascinated him and led Armstrong to record many every-day interactions between members of his family and of his rehearsals.

Elaine took us into the back of the house to see the kitchen, which contains a custom Crown stove made especially for Lucille and Louis and floor to ceiling cabinets coated with a vibrant turquoise laminate along with the first floor bathroom, which is wall to wall mirrors with gold plated fixtures.  When we passed the stair chair before we ascended the staircase, Elaine explained that Armstrong’s lifestyle was physically taxing.  He traveled and performed as many as three-hundred days per year.  He had three heart attacks in his life, so in his later years, his mobility was limited.

Armstrong also had a wood-panelled music room/office/den on the second floor of the house. He was so pleased to have a room all to himself for the first time in his life. On the wall in this room is a portrait of Armstrong painted by none other than Tony Bennett.  Elaine played another recording of Armstrong playing a song from his past and remembering how his band leader in school did not tell the students the title of the selection in case they were inclined to share that information and another band steal their unique choice of song. 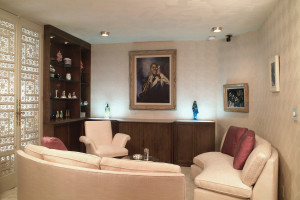 Elaine was protective of Armstrong and his reputation.  She insisted that he was beloved in the neighborhood because he was such a kind and gentle person.  She jokingly dared anyone to say anything negative about him on her tour.  She was especially concerned about folks who criticized Armstrong for not participating in the Civil Rights movement and for being a “smiling Uncle Tom”.  Elaine recounted a story about a journalism student  who interviewed Armstrong before a show and reported him criticizing Eisenhower for his handling of the case of the Little Rock Nine. In fact, his words were so uncharacteristically angry, the newspaper editor demanded more proof from the student that these were Armstrong’s words.  The student, Larry Lubenow, returned to Armstrong’s hotel room and photographed him while he was shaving, and Armstrong approved everything Lubenow had written.  Lubenow’s story surprised many people, and Armstrong still did not escape criticism, but either way, he took a position on the events unfolding in 1957 in the American South. 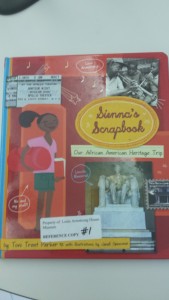 We spent some time in the Visitors Center before we left the museum, and we met more members of the museum’s staff and shared my Our Museums project with them.  They recommended several other Northeastern museums and sites focused on African Americans.  I got really excited when they told us about Toni Trent’s children’s book, Sienna’s Scrapbook, about a little girl’s road trip with her family who is, like me, visiting African-American museums and historical sites.  Instead of writing a blog, Sienna documents their visits to places like the Great Blacks in Wax Museum in Baltimore, the Frederick Douglass National Historic Site in Anacostia, and the Louis Armstrong House Museum in her scrapbook.

Check back next week, September 21st, for the first blog post in the seven-part Memphis series about my visit to the Withers Collection Gallery and Museum.