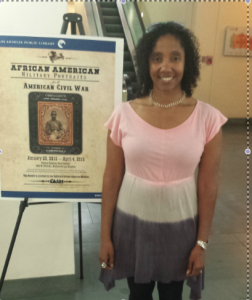 This exhibit is special because it is so personal.  The DC museum tells the story of the politics behind the war and the Black participation in it.  It also tells the story of various celebrities like Robert Smalls, Harriet Tubman, Harriet Jacobs, and Frederick Douglass’s sons who served in the war.  In this exhibit, however, the viewer sees the actual faces of the mostly nameless servicemen close up with the help of the most advanced technology of the time.  Some of the photos did include names and even notes about the temperaments of the men from the perspective of a White officer. 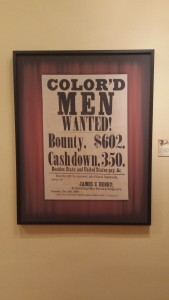 The fantastical story of George St. Pierre Brooks stood out to me and was featured in the exhibit in its own display case. When Brooks first entered the War as a slave, he was forced to serve his master’s son-in-law who was fighting for the Confederate side.  Then, when his unit was seized, and he switched sides and fought for the Union for the last few months of the war. His story gets really interesting after his service in the Civil War. He went on to tour and perform in foot races with P.T. Barnum; then, he sang with the Fisk Jubilee Singers touring Europe, and singing for Queen Victoria, and the German Kaiser. Next, he served as a volunteer civilian cook during the Spanish American War; finally he settled in Winnipeg, Canada around 1900.  There, he volunteered again to serve but this time in World War I after falsifying his age to be forty. He served briefly in France as a cook in the Canadian Expeditionary Force until his seventy-plus years caught up with him and he was discharged for medical reasons back to Canada where he lived thirty more years until 1948. 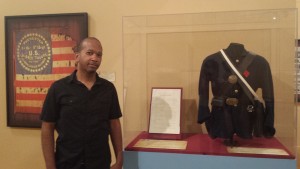 I was also surprised to learn through his exhibit that the US Navy was not segregated, and African-Americans had been serving in the Navy for decades before the Civil War.  This explains Frederick Douglass’s escape from slavery wearing a sailor suit, which was not an uncommon sight at the time.  The numbers of Black sailors increased substantially during the Civil War.  This exhibit does a great job bringing to life the nearly 200,000 African-American servicemen who made the Union victory possible. 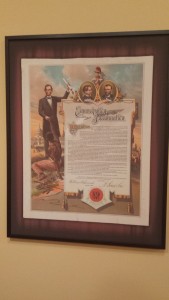 Check this site for other fascinating Civil War era photos of African-Americans from the Library of Congress.

Check back on Monday, June 14th to read about my visit to the Huntington Library’s exhibit, The US Constitution and the 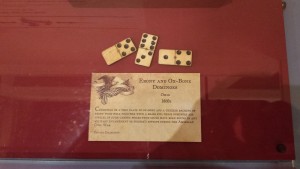