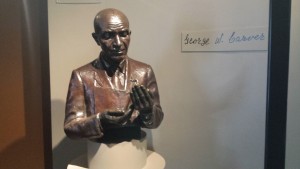 Like The Oaks, Booker T. Washington’s home on the Tuskegee University campus, the George Washington Carver Museum is owned and operated by the National Parks Service.  The museum is in the university’s former laundry facility, in a building that was built in 1915. It has been a museum showcasing Carver’s work since 1941, two years before his death.  Near the entrance is a recording of Carver reading one of his favorite poems, “Equipment”; the ranger called our attention to it.  I love hearing old recordings of prominent historical figures.  We heard a recording of Mary McLeod Bethune’s last speech at the Mary McLeod Bethune Council House, and I have heard a recording of Booker T. Washington’s Atlanta Compromise Speech. Listening to those recordings adds a new dimension to my image of the person. Plus, Carver had a very distinct voice that complements his somewhat quirky and lovable image but may come with a more unsavory and even sinister explanation.

In the museum we learned that in addition to being a scientist, Carver was an artist.  Almost all of his paintings were destroyed in a fire, but one painting that was recovered is on display in the museum as a testament to Carver’s diverse talents. 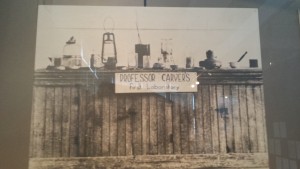 Also on display in the museum are many of Carver’s tools, preserved specimens, and photographs, including his experiments with the soybean, the sweet potato, and of course, the peanut.  Part of Carver’s intention with these experiments and discoveries was to harness ways for farmers to get the most from their crops. 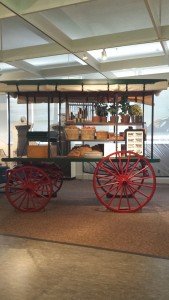 What stood out most to me was Carver’s educational innovation.  He implemented distance learning before the Internet and television. He designed the Jesup Wagon, which he would load up with seeds, livestock, plants, tools, and other products of his work and drive out into the community to teach farmers about new, more effective agricultural strategies.  He shared with them the value they could get from rotating their crops and from growing versatile crops like soybeans, sweet potatoes, and peanuts.

The inspiring video below on Carver’s life is available for viewing on the basement floor of the museum.  As you will see, the narrator mentions the friction between Carver and Booker T. Washington, a friction that fascinates me from the perspective of an educator.  The ranger put it something like this: Washington wanted to make sure all records were in order and all documents carefully maintained, while Carver wanted to get down and play in the dirt.  Both are admirable and invaluable, but this museum demonstrates how there is something so special about a man who wants to play in the dirt.

Check back next Monday to read about my visit to the Legacy Museum at Tuskegee University.