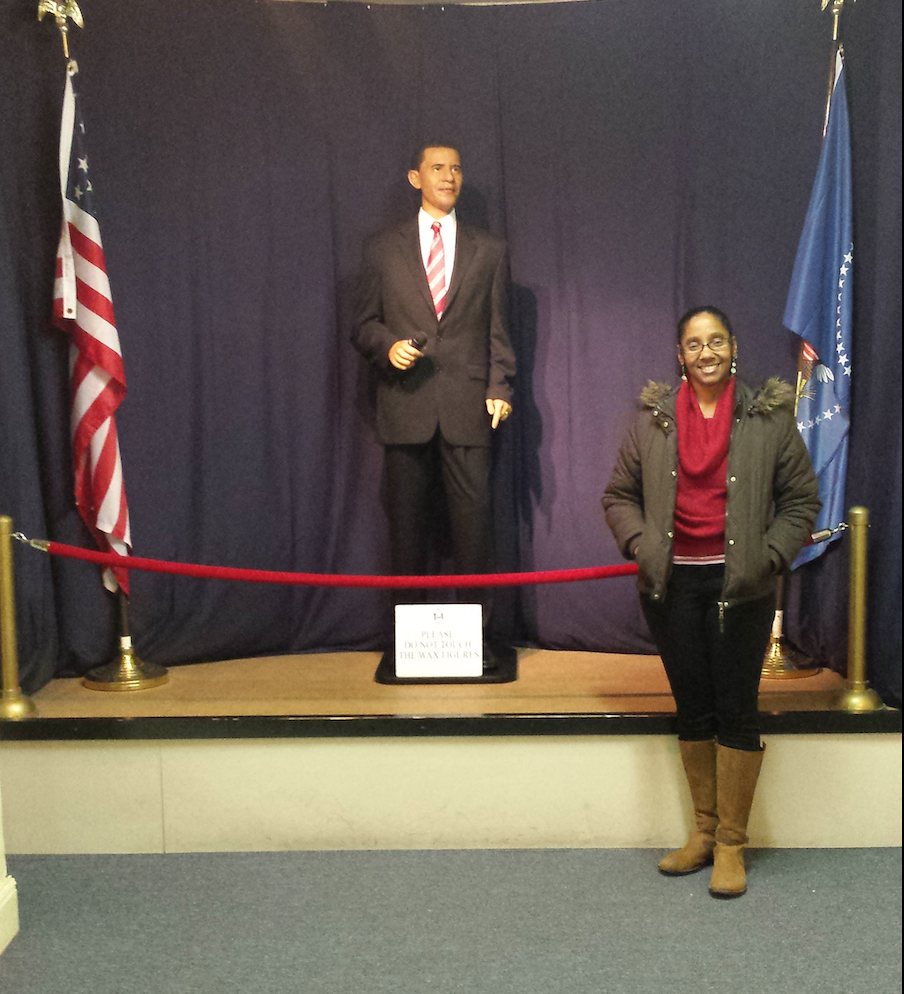 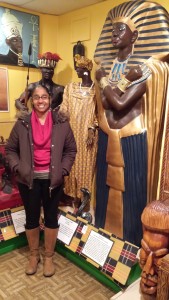 After recovering from the slave ship we detoured off the main hallway into a set of three adjunct rooms, the first containing the Ancient Africa exhibit room, which houses figures of Akhenaten, an ancient Egyptian pharaoh considered by some as the founder of monotheism;Nefertiti, his wife; Imhotep; Chaka Zulu; Makeda; and others.  From that room, we went on to the “Entrepreneur Scene,” which prominently features the figures of the FUBU clothing company among other well-known African-American entrepreneurs.  Then, the last room in this section contains the “Walking in the Footsteps of our Ancestors” exhibit, which, incongruously, includes the Barack Obama Scene.

Returning to the main part of the building, we emerged into the Main Exhibit Hall #1, which continues the story of American Slavery with a figure of an escaped slave traveling the Underground Railroad and Harriet Tubman along with John Brown, Henry “Box” Brown, Nat Turner, and a host of others.  At the end of the Main Exhibit Hall #1 are the stairs down to the underground level and up to the second floor.  In the stairwell are signs indicating that the Lynching Exhibit is downstairs and that “Parental Discretion is Advised” for the exhibit.

We made our way downstairs, and at the bottom of the stairwell encountered the framed poster-size Lynching Victims Senate Apology Resolution.  Before this museum visit, I knew nothing of this 2005 resolution, and I was surprised to see that just ten years ago, the US Senate had finally apologized for its inaction as hundreds of African-Americans were brutally and publicly murdered.

Other items on view in the museum’s basement include a disturbing rendering of a desecrated body post-lynching in addition to replicas of “specimens” of various body parts that might have been found on display in a proud home of a participant of a lynching.  There are also photographs of actual lynchings, newspaper articles, photographs of protests against lynching, and a wall dedicated to Ida B. Wells who dedicated much of her career in journalism to exposing and denouncing lynching.

In a far corner of the basement, there is an exhibit absurdly dedicated to showing how today because of drugs and gangs, “we are lynching ourselves;” this exhibit is even mentioned in this 1999 Baltimore Sun article.  The costuming and images are somewhat outdated; I imagine that they were added during the crack cocaine epidemic of twenty to thirty years ago, and I am optimistic that with the planned expansion and renovation of the museum, this exhibit will be retired.

From the basement we traveled to the third floor of the museum where wax replicas of mostly local heroes like Henry Hall, a late Baltimore aquarist, and Ben Carson, the famous conservative Johns Hopkins neurosurgeon, along with some figures from South Africa’s fight against apartheid stand on display. 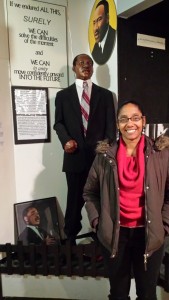 Back down on the main floor of the museum, the last section to see before you exit is Main Exhibit Hall #2. As you enter that section of the museum, Matthew Henson greets you in his usual hooded fur jacket in a snowy scene.Then there are renderings of Black artists and writers like James Baldwin, Zora Neale Hurston, and Langston Hughes and athletes like Joe Louis, and the last figure you see as you prepare to cross the threshold back into the museum lobby is, of course, the Reverend Martin Luther King Jr.

This unique museum includes wax replicas of so many historical and current figures that I did not capture here. It is definitely not like any other museum I have visited, and to get the full effect, you must visit it yourself.  The plans for an elaborate expansion are posted in the museum with an appeal for donations.  I am hopeful to return one day to the newly expanded and renovated space that would do justice to the over one hundred wax figures and scenes now on display in this one-of-a-kind museum. 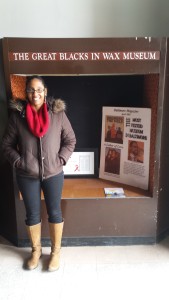 Check back next Monday, May 25 to read about the Reginald F. Lewis Museum of Maryland African American History & Culture.